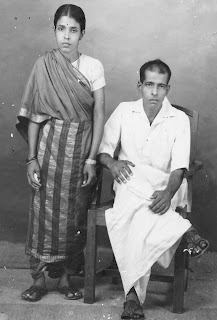 This great person was my father . Though I do not know his exact birth details , he was born in the early twentieth centaury as  the second son of Puducode Vadakke Gramam Rama Pattar  aka Saddil Raman and  Parvathy  the daughter of  the very rich Pulacode Rama Pattar . He had three younger sisters and a younger brother. His elder brother also was named as Raman and so he was called as Kunju Raman.  Though his father was from a rich background, due to fate he lost all his property.  He was  called to Chelakkara by his rich sister and a very rich father in law. His eldest son who was way word deserted the family  and ran away.  When Kunju Raman was  about 10 years old his father died of small pox . His  younger brother died before him.  His three sisters and mother were really starving. So the little boy of ten called Kunju Raman left his village to work in the Shanmuka Vilas hotel of his uncle at Kodaikanal . His uncle had several sons. The little Raman joined them as a worker. He has once told me that his dress was only a towel  and in winter he used to cover himself with an empty gunny bag. Because he was an extremely intelligent person , he learnt the art of serving in the hotel quickly. But he was not getting sufficient money to send to his mother and sisters. So after serving about an year he left Kodaikkanal  to work in another hotel in Combatore. He shifted later to Madras , Secunderabad and Bidar  .When he was 32 he owned the very famous hotel called Madras Brahmins hotel , which was 3397 in Kingsway secunderabad.

We his children were educated by him and we became tolerably well off. At my very young age , when I was a scientist in Coimbatore, I had asked my father whether he wanted to visit  Shanmuka Vilas, Kodaikkanal. Some how he never wanted it. He said that it will take him  to the sorrow and misery that filled  a part of his life. He never wanted it. My father died at the age of 97 . I am now 72  and I had always had a longing to visit Shanmuka Vilas , Kodaikkanal.  It is still owned by the grand son of my father’s uncle .  This opportunity arose recently when my daughter and family went to Kodai  on April 25th of this year. I accompanied them . The name of Shanmuka Vilas has been changed to Padma Lodge . It was with flowing tears that I asked my daughter to take a photo of that more than one hundred years old building where my father worked when he  was ten. 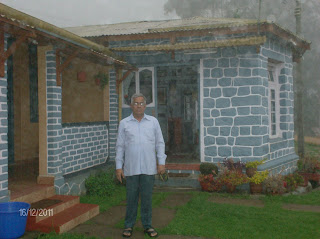 The present owner also pointed out an almost one hundred year old Bougainville  tree at the entrance of the hotel. I am also giving a photo of that  tree. 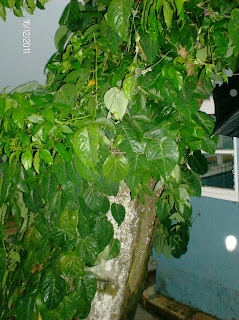