A remarkable initiative which should be followed All over India

A  remarkable  initiative  which should be followed  All over India 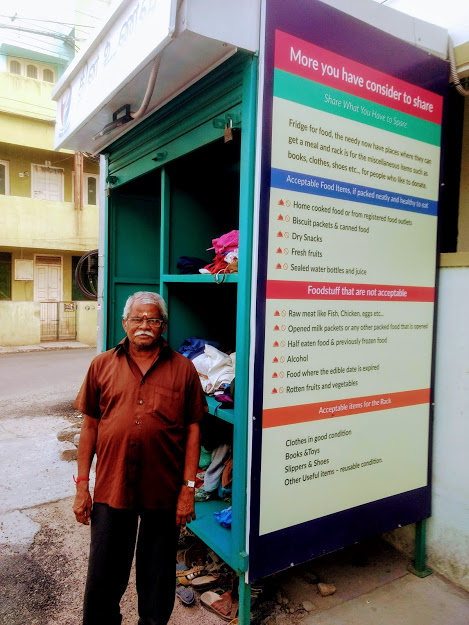 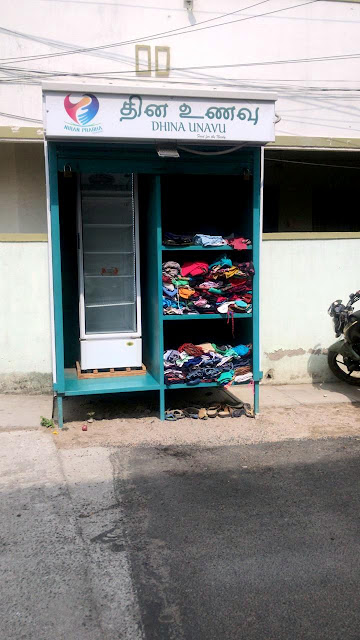 I had been to Coimbatore  last week.  Behind  the Sai Baba temple , I saw a peculiar  Structure.It had one  refrigerator on one side and a shelf  on the other.It was called “Dhina UnavaU” meaning “daily food  “. There was old ex secrvicemen sitting on a chair  near the structutre .The purpose was explained on both sides of the structure (one side Tamil and the other side English)
In short what was written , was,
1.Any body can leave  any food (Remaing excess in the house )  in the refrigerator  .This could be taken by any one who needs it
2.Any other used  item which people can spare   can be left on the adjoining shelf. I found lots of cloths and used foot weart in it.
3.The security would not interfere   with the process but would help  any one who wants to place and who wants to take.
What a remarkable idea.No body in the locality are throwing excess food and excess material. It reaches   the poor without fan fare as they know it   and they take the well preserved food. . I saw  that it was run by a trust called “niran Prabha”    and it does not have a web site.
If possible please start doing this great act of  Charity,  Ramachander

Posted by Raja Thatha at 9:40 PM No comments:

The original   Name of Nathamuni was sri Ranganathan.Due to his sagely qualities he was   called as Natha muni. He was working in the Veera Narayana temple of Kattu mannar gudi.One day  some devotees   from outside the town came to the temple .They sang the ten stanzas composed by Nammazhvar on Kurukoor Sadagopan .He took it down  and made his life’s mission toi collect   all the 4000  Songs sung by the 12 Azhvars  in 108  temples of Lord Vishnu  spread  all over the country( From Kerala to Nepal) .
In his search he happened to meet Parangusa dasar   who was the disciple of Madhura Kavi aazhvar   who was the direct   disciple of Nammazhvar.Parangusa dasar   taught him  The great prayer  “Kanni nun chiru thambu” composed by Madhura Kavi aazhvar(my translation  https://stotrarathna.blogspot.com/2019/03/kanninun-chirutthambu.html  )  on his Guru Nammazhvar .He instructed Nathamuni to repeatedly    chant this great prayer.When he completed chanting it 12000  times Nammazhvar   appeared before him    and gave him all  the 4000 verses known as Nalayira  Diviya Prabandham .
Nathamuni divided the 4000  songs in to 4 sections. Out of which three sections could be sung with   Raga  and one section was just poems.He then taught these to his nephews “Melai Agathu Azhvan”    and “Keezhai agathu AAzhvaan”.
There is a belief that one day some two men armed with bow and arrow , accompanied by a lady and a monkey came in search of him.When his daughter told about this Nathamuni  immediately knew that it was Rama, Lakshmana, Sita and Hanuuman
But for this great devotee  of Vaishnavism , we would have lost the inimitable treasure   of devotion in Tamil called  “Nalayira Dhivya Prabandham. 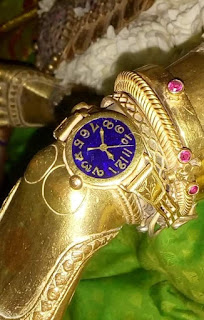 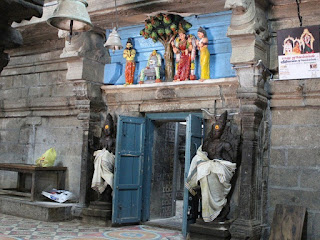 In tirunelveli district  , near  the temple  town of Azhvar Thirunagari is a Shiva  Temple in SriSailam.  It is 47  km from Thirunelveli and 12 km   from Papanasam dam  The God here  is called  Sri Siva Saila nathar   and the Goddess  Parama Kalyani Ambal
Unlike other Goddesses  of Pandya kingdom like   Madhurai  Meenakshi,  Thirunelveli Gandhimathi    Sankaran Koil Gomathi , this goddess   has  four hands. She is made to wear A golden Wrist watch during festival  times. Other peculiarities  of this temple are

My contributions in brief 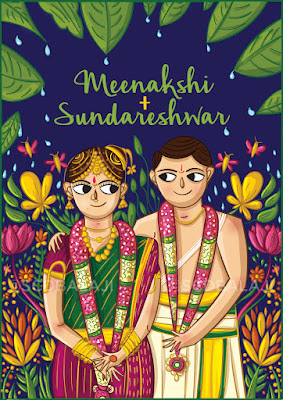 A groom    should  expect   a bride ,
Who is interested  in married life ,
Who would never  ever be his slave,
And  who never ever be  his boss.

A bride    should expect a groom,
Who is interested  in married life ,
Who would never   ever be her  boss,
And  who never ever   be her slave.

A  bride    should expect    for a groom,
Who never thinks   she is ugly,
Who never wants her  to look like  heroines  of films,
And who  loves him  and wants  to please  her in always.

A groom  should    expect a bride,
Who  is interested  in giving him a child,
Who to the best extent looks after his parents,
And also interested  in the welfare  of her parents.

A  bride    should    expect  a groom,
Who is interested  in her giving a child,
Who  is also interested in welfare of her parents,
And who helps  her to look   after   his parents.

A groom    should expect   a bride,
Who is  as rich or poor as he is ,
Who is as much  educated  as him,
And who would help him making their family  prosperous .

A   bride  should expect   a groom.
Who is as   rich or poor as she is,
Who is as much educated as her,
And who would help  in  taking care  of chores

Posted by Raja Thatha at 3:02 AM No comments:

Hell , before and after election

Hell  , before   and after  election 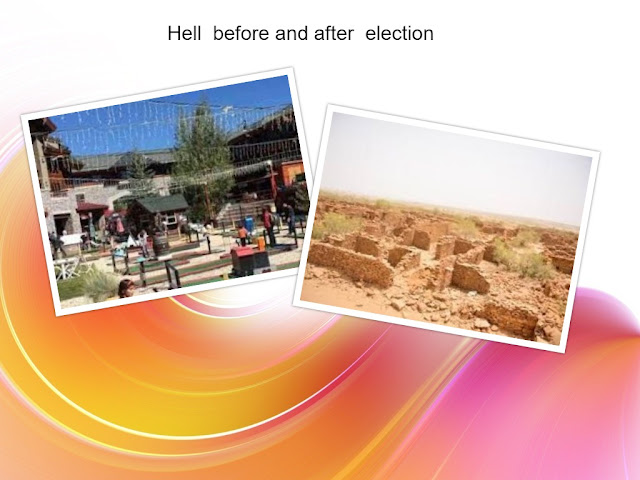 (I enjoyed reading a similar Whatsapp  post)
A politician   died   and he  was taken up,
A door opened, and he   saw five star hotels,
Golf links. Dance  by very pretty girls and  so on.
There  he saw a board  “Vote for  this  hell”

He went back to the gate   and asked ,
The chowkidhar  , I want to go to heaven,
And When he went there , he  saw ,
That is was   extremely boring place.

He saw  huts there   and some idiots,
Were sitting   and laughing over nothing,
He saw   homes after homes,
Very ordinary   and middle class.

He went back   to  the Chowkidar ,
And said, “I want to go back to hell”
Chowkidhar said, “once  you go back,
You would not be able  come back.

Politician nodded   his head vigouosly,
And went back to hell   and they threw him in,
And what he saw was barren land, dry climate,
And poverty   and suffering  every where.

He went back to the Chowkidhar   and asked.
“What happened” , Chowkidhar   smiled,
And told him, “the election  is over  ,
And results   were announced yesterday  .” 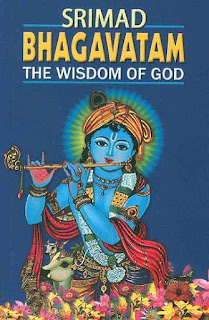 Translation  of sloka   and  brief interpretation
By
P.R.Ramachander

(My humble thanks to  the great author   Sri Aravind Sivaraman.)

A horoscope  consists  of 12 houses. The first house is Lagna and further counting is done clock wise.These houses according to astrology , indicates certain aspect of the person, whose horoscope we are having.  Depending on the good and bad as well   the power of the planet, we interpret the person’s  problems as well as good.The learned author has chosen these slokas, given detailed introduction and interpretation of the 12 slokas, as well as indicated why he has chosen those  slokas, which I have not done.

First  House in Horoscope-Lagna- Deals with health ,prosperity and position in life

Taking  his seat waiting for death near  river Ganges,
Surrounded by very great sages,
With Lord Krishna  going  back to his abode,
With piety  and wisdom for all.

Chanting this sloka, They would  be healthy, prosperous and spiritual  in life

Second house  in Horoscope- Ability to express himself, protector of people

Salutations  to  God  ,
Vasudeva who composed the Vedas,
From whose  lotus like lips,
People   drink the nectar of  wisdom

By chanting this they get the power  to speak , specially  about spiritual matters

By chanting   this sloka  , the siblings  will increase  and you will have at least one brother.,They also  would get  courage  to express  themselves.

Narada said
The way shown to you  by your mother,
Is the one leading  to the highest  good,
Namely  God Vasudeva,
And so  pray to him with mind devoted to him.

I was earlier a king named Bharatha,
By getting rid of  all bondage by attachment,
I started    worshipping God,
But I was a born as a deer   due to attachment of deer.

You can get children and also know about punya  of previous birth by chanting this.

Sixth house of horoscope.wounds in body, loan, strength of mind

Those sins which can be got rid definitely,
By penance, charity   as well chanting of manthras,
But the vestiges of such sins cannot be got rid by them,
Baut only by the service    to the feet of the lord.

By chanting this consistent sores can be got cured, wE can get better strength of mind and get rid of loans

Prahladha said
Hearing, Singing about Lord Vishnu,
Remembering about him, serving his feet,
Worshipping him , Saluting him and becoming his slave,
Becoming his  friend, dedicating our soul to him

All relationship especially with our wife will improve,

Eighth house  of horoscope  Sickness /or death to uncle, in laws, emergencies in life, death of husband

Salutation and Salutation  to the one who is cause of all,
You have no cause, you have   wonderful cause,
All agamas and Vedas   are in a great ocean,
Salutations to the ultimate refuge and every one’s  object of attention.

You can get rid of fear of death, The chances of your husband  dying before you will diminish

Oh Bharatha , He who   is friendly and alike,
To all created beings and  fixes   his mind,
Through devotion  on  the Lord Vasudeva,
The universal spirit  is free from all blemishes.

The one who reads this would get inherited wealth and greatness

Tenth house of horoscope  .  The one who reads this would get inherited wealth and greatness

He pacified them and drove   in a chariot,
As brilliant as   the shining Sun,
Accompanied by brahmanas   and elder Yadhus,.
Like a moon    in the  midst of all the stars.

Chanting this sloka would give a job , make existing job firm  and will have good beliefs in life.

Intelligence consists in discretion, knowledge of Vedas and penance,
Knowing the traditions and  deductions from it,
Which would survive from beginning to end,
IN the  middle and  is the cause of universe

Increases wealth and prosperity and helps us to un derstand ourselves

Singing his name  ,
Destroys all sins,
And respectful salutation ,
To him  brings down all sufferings

Singing this wound bring down expenditure   and increases income