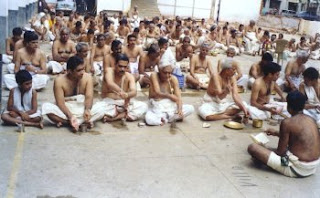 I am starting with this title fully aware of the fact that this is a title of a serial in Jaya TV which is popular among Brahmins. The first part of the serial ended with a message that Brahmins are no where to be found in this world. This was the only conclusions possible for such a question.. But for some obscure reason , the second part started. This does not even try to remotely answer the question asked. An attempt so far is being made to show that a Brahmachari who follows Vedic rituals is the only Brahmin. Taking in to account the fact that Grahasthas(house holders) are the back bone of the Brahmin society feeding both the Brahmacharis and the Sanyasins, this seems to be a wrong conclusion. In my own way I would like to answer this question.

1. There is a great Upanishad called Vajra Suchi Upanishad which tried to answer this question. The author concluded based on available evidence that a man does not become a Brahmin based on parentage. He quoted umpteen examples , of Brahmins in Puranas, whose mother was not a Brahmin (Veda Vyasa for example) , father was not a Brahmin and either parent was not Brahmins.(For e.g. Agasthya who was born out of a pot) . He concluded that a person becomes a Brahmin only by realization of Brahmam and by his seeking salvation.
2. Manu as well as Chanakya in their well known treatises, tell of several circumstances when a Brahmin becomes a non Brahmin.
3. I have the good fortune to translate the prescribed Aacharas of Brahmins (http://brahminrituals.blogspot.com/ ) . Here one can find a very detailed list of rituals and Aacharas which a Brahmin has to follow. These are extremely difficult to follow even if one devotes all his 24 hours and all the assets to this purpose. But most of us have to earn money to make both ends meet. This is definitely not banned in the Puranas and Vedas. We , in Puranic and Vedic times find Brahmins whose job was not studying Vedas. There were doctors, astrologers . Astronomers, mathematicians , warriors etc among them. Possibly these hobbies(?) were done after they learnt the Vedas by heart. It is interesting to note that learning Vedas by heart and teaching what you have learnt to others was the only thing expected out of a Brahmin. It was not compulsory for them to learn the meaning of Vedas. There were another group of special Brahmins called Sages who were supposed to do this and educate people as to what is written in Vedas. The greatest of them was Veda Vyasa, the Son of Parasra who was born to a Brahmin father and fisher woman mother. These sages were living universities. They were the people who taught economics, warfare , architecture etc to other people. I am sure we do have people who learn Vedas by heart even today as a means of making both ends meet. Most of them do not know anything of the meaning of all that they know by heart. Most of them (I am talking about our Acharyas) have good knowledge of rituals (performance which is their livelihood ) as prescribed in Gruhya Suthras . I have also seen many priests even do not know manthras for some rare Karmas . For example the priest who conducts Avani Avittam, every year , prefers to read the manthra from a book, rather than tell the manthras by heart.
4. All Brahmin grahasthas are supposed to maintain the fire they light on the day of marriage, till their death. In fact their funeral pyre is to be lighted out of this fire. I am not an expert but I feel that as on today, not even one Brahmin among the million Brahmins maintain this type of fire. Then they are supposed to do Agni hothram and worship at dawn, noon and dusk (Sandhya Vandanam). People who do not have father are supposed to do 96 tharpanas in a year,. These tharpanas are supposed to be done after performing Madhayhneeka which is to be performed at noon. At least I do not know any one among my acquaintances who do all these things.
5. There are several taints due to birth and death to be observed in our clan. With scattering of the clan, all over the world and the phenomenal increase in members of the clan, I am not sure whether we ever hear about the birth and deaths in our clan and later observe the taint period. After the purificatory bath of the taint, it is necessary to change the Yagnopaveetha and sprinkle Punyaham in our homes.
6. With family definition becoming as husband and wife and their children and added to the fact that both husband and wife have to be employed to have a fairly decent living, It is almost impossible for the lady of the house not to cook during five days in a month and follow the rules and regulations during the period.. I agree that the percentage who observe this is in the lower end of the two digit figures.
7. I am of the strong opinion that observing rituals is not the sine qua non of a Brahmin. There were many great sages in India who opposed this tooth and nail. According to me , a Brahmin should be a gentleman human being whose heart is full of mercy to all living beings in the world. Apart from this he should make serious attempts to become one with God by methods mentioned in several of the Upanishads. He should eat soft food without Masalas . He should never get angry . He should not have an ego and should not be proud. I am sure such Brahmins exist in this world even today.
Ramachander
Posted by Raja Thatha at 10:21 AM 8 comments:

My excursions to find out meaning of Carnatic classical music lyrics

My excursions to find out meaning of Carnatic classical music lyrics

Though my forefathers were musicians, unfortunately I am very ignorant of music. When I was a child, I never understood what is classical music and used to get bored with it. Slowly I developed a taste for this type of music. There was sweetness and discipline in such type of music. But I rarely understood what the musician was singing about except the lines of Pallavi which the musician was singing about. Later I started listening to songs composed by Sage Purandarada in Kannada, Oothukadu Venkata Subbatyar , Gopala Krishna Bharathi and Subrhamanya Bharati in Tamil and Iraviyamman Thampi in Malayalam, The meaning of these songs were very sweet and extremely poetic. Some of these songs brought instant tears in my eyes. But I was told that they were nothing compared to the songs written by the trinity of Carnatic music. Fortunately I had a working knowledge of Telugu. Accidentally I got a book , giving meanings of 67 songs written by the great Balakrishna Sastrigal. I started translating them in to English. Suddenly I started to see why these songs were considered as Good. My translations of these songs can be seen in
http://translationsofsomesongsofcarnticmusic.blogspot.com/
I still miss the great poetic frenzy that I found in the songs written in Tamil, Kannada and Malayalam. But these songs take you to the acme of devotion.
Posted by Raja Thatha at 10:52 PM No comments:

Being a member of the higher caste who is religious by upbringing, I was always thinking Of Vishnu, Brahma and Shiva as the greatest Gods and the four Vedas as the only source book of Hinduism.
When I was a child in Kerala I used to watch with interest the worship offered to Kutti Chathan in my home. A cock was cut and toddy was offered to the God. Al people believed that, if this worship was not done our cattle will suffer and die. I understand there is a temple for this God near Kunnamkulam. Later after very many years, when I was working in the Vittal village of South Canara, I saw thousands of sheep and cock being taken to a place outside the village. Due to curiosity I followed them. Then I was witness of the gruesome ritual of their sacrifice before a tiger statue made of wood. Later I came to know that such worship was prevalent in almost all villages of that district. Later when I was reading about temples of Kerala, I came to know about Parasini Kadavu Muthappan. Toddy and meat was offered to propitiate this God. I was also told that there were many more such temples in Kerala. During my study as well as job in Tamil Nadu, I used to see huge statues of men with protruded teeth as well as big horses before entering any village. When I enquired I was told that they were guardian gods of the village. Recently I decided to study about them and brought several books on these guardian Gods. Most of these Gods are non vegetarian and are offered meat and toddy for worship. Some even offer cigars. The people of the village (including Brahmins) have great faith about these Gods. One of the very orthodox families that I know is offering the first cropped hair of the children to one such God in its native village. I also found that there were very interesting human stories behind each such temple. Some of these Gods used to live in those villagers. Some were thieves and some of them were even robbers. Some of these gods were related by story to the famous Hindu Gods. (read about them in http://villagegods.blogspot.com/).
Most probably such a system of parallel religion exists all over India. Most of the religious people are aware and afraid of these Gods, Why then are we not talking about this parallel religion. Why our Madathipathis, seers and sages never utter a word about them? Do they fear that if these are brought out then our main religion will suffer?
Posted by Raja Thatha at 10:51 PM 3 comments: