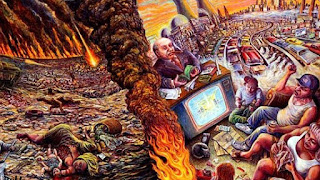 (After   almost  the entire Bhagawatham is  narrated by sage Sukha  , King Parikshith    asks him , about Kali age  .In the chapter 2 of  the 12th dasakam of Bhagawatham , the reply of the sage   is there in great detail . I  came to know of it by reading the posting of my friend  Sri Vasu Iyengar  .I have not translated it , but I have made a summary of what   the sage   told him.I am sure   many of you would feel this is written by   a news analyser  of a modern news channel .No it was written 5000   years back,. Please see a video   which summarises  it further  https://www.youtube.com/watch?v=3oVqkrJAgX4 )

2.Wealth  alone would  be the criteria,
For judging   a  person’s   greatness  ,
And  it would  determine  whether ,
All   his actions   are right or wrong.

3.Sexual attraction   would   be  the only,
Criteria in choice of matrimonial partner,
Trickery   would be the  only  business  method,
And sacred thread  would be  the only sign of a Brahmin

4.A brahmachari  , Grahastha  or Sanyasi,
Would be recognised only by their external marks,
Getting justice would depend on one’s  ability ,
To   gratify the  person who dispenses justice ,
And  capacity  to  talk  would be  the only  sign of scholarship

5,Poor person would  be considered as  not pious,
A good person  would be always a hypocrite
Mutual consent for sex would determine marriage,
Presence of a toilet  would indicate , whether a  person is clean

6.Any    distant   pond or river  would only be sacred,
Any temple    that is  huge would   only be great
Exhibiting   bare body   would always make any one pretty,
Only pursuit of human beings  would be to fill their belly,
Courage to talk any non sense  would make any one  an orator.

7.A person would be considered efficient, if he supports his family,
All  devotional     acts   would be carried out only to get fame,
The world would be   filled with wicked  people  ,
And the strongest    of them all   would become the   ruler.

8.People  would   be oppressed by   famines, floods, and taxation,.
Excessive cold, warmth, speed of wind  and torrential rains  would always be there,
Human beings would not get food    to eat   and people to marry,
And    untimely death  will occur  to young people

9.Varnasrama Dharma  which divides labour would be discontinued,
All  human beings would not attain proper growth and be stunted,
Religion would be replaced by lies and rulers by thieves,
And there would be whose  profession is to steal  and kill.

Posted by Raja Thatha at 3:38 AM No comments:

Summarised  in English
By
P.R,Ramachander 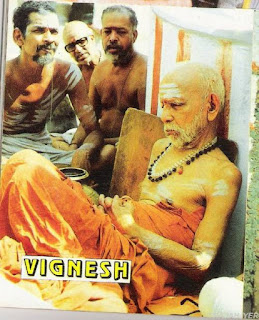 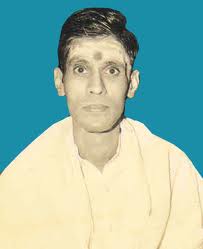 Vali the great monkey of Ramayana with a rainbow personality

Vali  the great monkey  of Ramayana  with a rainbow  personality 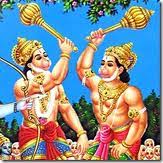 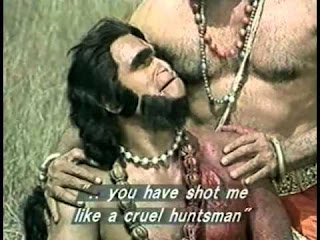 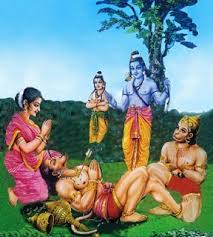 (I read  in a face book post of my friend Sri Vasu Iyengar  , about   how Vali was considered   as having  human, monkey as well   as divine personalities, as was pointed  out by  a great Scholar of Epics, Sri Keeran..I just stretched   that idea a bit and saw more aspects of personality in the great monkey.)
Vali, the son of Indra was a social worker,
Who was extremely strong and helped   the devas ,
In churning   the ocean of milk , to take  out nectar,
And he was  presented  the Gem like Tara  , born from ocean

Vali  was also  a great  brother  to his   brother  Sugreeva ,
Whom he did not   allow    to fight   with Asura   called  Dundhubhi,
And himself   entered   the cave   to fight   with that  great Asura ,
Instructing  him to wait for him and go back  as king  if he dies.

Vali   was   an extremely  short    tempered   human monkey  ,
Who could not tolerate   his younger   brother  becoming ,
A king of monkeys instead of him   and drove  him away  ,
And even took   the pretty wife of his brother  as his own.

Vali   is a wise  monkey  who could  think like  human beings,
When his  wife Tara told him not to go to fight  with Sugreeva,
Because , he was   coming   to fight   with him  only  because ,
He was supporyed by Rama,feeling  that The great  Rama was God.

Vali   is   a real capricious   monkey  who could  not understand ,
Why Sugreeva   was  coming  garlanded to fight   again and told his wife,
That  he would   tear  his younger   brother   in to small pieces,
For his    foolish act  and went   needlessly to fight   with him.

Vali  is   a real lawyer  monkey who tears  in to pieces  ,
The   arguments  put   up by  Lord    Rama , for killing him,
Hiding   in side a  bush  and   gets recognition  of the world,
For being   wronged   by  Rama , the otherwise Maryada Purushothama

Vali  is a God like  monkey, who when he   understands  ,
That  death is nearing him, requests Lord Rama  to make him a king,
For  in spite  of his silly  behaviour  was   essentially good,
And also entrusts   his  son Angadha  for  protection with God  Rama

Posted by Raja Thatha at 2:32 AM No comments:

Posted by Raja Thatha at 6:03 PM No comments: