I have been always fascinated by  the village Gods of Tamil Nadu, who re termed as “Kaval deivangal(The security Gods). I have found  that the people of Tamil Nadu have an  affection mixed with fear towards these Gods. Here is a write up about some of them arranged alphabetically . I am sure these Gods who form a part of the natural  scene of Tamil Nadu would  guard   all  of us. 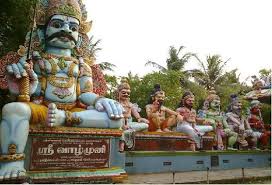 English translations of 200 Thyagaraja  Krithis
(Dedicated to Sri.K.Muthuswamy )
By
P.R.Ramachander
I have lived several years in Andhra Pradesh and  am  fairly conversant with Telugu speaking but I  did not feel confidant enough to translate  Thyagaraja’s Krithis in to English. When I got by the Book  written by the great Katha  exponent  Balakishna satrigal  in tamil containing  meaning of several  Thyagaraja Krithis based  on that book, I did translate  about 50 krithis in to English.   Though I went on translating    several other Krithis by other composers  , there  was  a sad feeling within me   that I have not  done  sufficient justice  to what I was doing.
Two months back  I happened to attend a wedding in Mumbai. This was attended  by my eldest Sister in law  Mrs Janaki Muthuswami and her daughter  Meenakshi Muthuswami.  They had brought me a present  . It was  two books from the collection of my co brother  the late Sri  K. Muthuswamy. My sister in law told me   that   seeing my  translations of several  Tamil Krithis, she felt like searching    the great book collection of  my late co brother and they were able to locate    what is  most needed by me.
Sri.K. Muthuswamy  was  from a very scholarly  family belonging to Kumbhakonam. HE belonged to the family of Sri Apoorvaiah  who was revenue minister of the erstwhile  Tanjore kingdom. REcognising his great work, Lord Wiliam Benetick,  presented Apoorvaih   with a palanquin to   move about.When he was  retiring it seems  the king of Tanjore asked Apoorvaiah    as  to what he wanted. The humble Apoorvaiah  who had a house near  Mahamaham tank  , wanted the king to permit him to have a window  to his house so that  he could have the Darsan  of AdhiKumbeswarar  through that window.   Apoorvaiah and his family   were great  followers of the Kanchi Mutt . Sri K.Muthuswamy himself   never used to  miss offering his salutations to   Poojya Periyavaa , whenever  he visited south of India.
I strongly feel that   it was my co brother himself   who gave the idea   to his daughter to serach his book collections and   give me the book that I most needed. With the help of the book , I have translated in to English  200 Thyagaraja Krithis(list given below) . I would like to dedicate these translations to my co brother
sri.K. Muthuswamy.
My translations can be seen in
http://translationsofsomesongsofcarnticmusic.blogspot.in/


Yevarunnaru
Posted by Raja Thatha at 11:38 PM No comments: