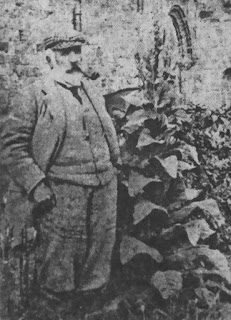 It was 18 years back and I  was  extremely busy in collecting  information of  Kerala iyers. One day  I received  this (hand written) hote from  SERi V.R.Venkateswaran  of Trivandrum. He was  80 at that time. Seeing my appeai, he went to The Kerala  State  Government Library and copied this portion  about Kerala Iyers   from the original Logan Manual on Malabar. Mr Logan was an ICS  officer of British Government  who fell in love   with Kerala and pain Stakingly   compiled  lot of info about Kerala.
Before  you read  you should know that  Tamil Brahmins in Kerala were known as “Paradesi Brahmins”.In fact til as late is 1960, in the Goivernment sale deeds   they were called that.You should   also know that this  is one of the earliest History of these  Brahmins

Source Courtesy: Sri V R Venkiteswaran, Trivandrum.
Extracts from William Logan (1887) Malabar Manual, Vol-I
Of the East coast or Paradesi Brahmins, it is unnecessary to say much as they differ in no respect ordinary east coast Brahmins. They are calleThey are called PATTARS, a transformation of the Sanskrit word Bhattar. They engage in trade and agriculture and in domestic and other services. In former times they were used as confidential messengers and spies. One class of them are styled as Choliya or Aryapattars and instead of wearing the top knot of hair (Kudumi) on the back of their head as other east coast Brahmins, these wear it on the top of their head like Namboothiris.
The great Pattar settlements in Malabar lie in Palakkad Taluk, a taluk that if ever was occupied by Namboothiris for a long time past has been deserted by them. The Pattars live in gramam or villages, the houses being arranged in rows and streets like those of the east coast villages.
Differences between Malabar Brahmins and Pattars
Another distinguishing feature of Namboothiris and Pattars is Smartha Vicharam. In this trial (Smartha) a women suspected to be guilty of light conduct is under pain of excommunication from Namboothiri fold. Pattars do not have such trials. When the trial is finished a night is set apart for pronouncing sentence or as it is called ” for delivering the true figure frame or aspect of the matter.” It takes place in the presence of local chieftain. The Smartha winds up with the statement that “Kutti-Pattar or boy pattar or servant pattar will name the adulterer or adulterers.There upon the servant comes forward steps on to a low stool and proclaims the name or names.
A man of the pattar caste invariably performs this duty. It is essential that the man who does it should himself be a Brahmin as no Namboothiri or Embrandiri would do it for love or money.
A needy Pattar is found and paid handsomely for doing it. Directly after he has performed the duty he proceeds to the nearest piece of water, there to immerse his whole body and wash away the sin he has committed. (pp 128)