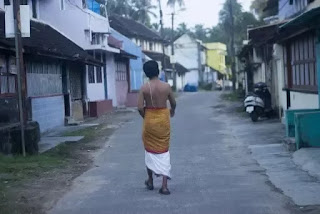 (When I was  studying intermediate  first year, I wanted a Time piece to wake me up .When me   and my father  went to the shop in my village, he said it costs Rs 12/- My father  said, “konthe( baby son)   we cannot afford it  .  From then on I studied  8 long years  without an alarm time piece.  During my final   year  M.A. . I used to sleep at 12  midnight   and  wanted to wake up   at 3 AM. I was in an upstairs room.My friend sri P.Sivadas(my face book friend)    , used to come at 3 Am behind  my room and throw    stones  in to my room  through the open window so that  I would wake up. Then on I felt bad in purchasing  an alarm .
I remembered  this   when I read  this tamil  posting  by Venkat Srinivasan  and several others  , which I have translated.)

When my father  gave me  the cardboard exam pad,
Without a clip  , I cried  for a three  rupees clip,
And after   lot of struggle  he did purchase  a clip,
And told me, Ï never got  even a board”

I did not believe  , what  my father  told at that time,
And when my third standard daughter    wanted  a board,
And when the shop owner  showed  a board for one hundred  and fifty,
And when my daughter asked for a better one, I narrated  the above to her

Unable to buy an ink bottle   for ten rupees,I told her,
I had filled my pen by    giving   ten paise in the shop,
I always used   the old text books   of my elder  brother,
And never forgot the plate  for   free  lunch in the school

And my daughter  laughed at me   and told  ,
Ëven when you bluff, there   should be a limit in it”
And I remembered   my father  struggling  for paise,
And how I laughed   at him not believing it

I remembered  my mother  shouting   at  the Government lorry,
Which used   to supply twenty litres  of water  for twenty paise,
And my daughter, who   shouts   at  me and my wife,
For not buying   drinking water  can for thirty five rupees.

I remembered   how  along with  ten boys   I used to play,
Cricjet with rubber ball  and bat  made of the stem  of palm,
And when we used to feel thirsty, how we used to knock   some one’s door,
Drink as much  water as we want  and thart house lady  would ask , “do you  want more?”

When I asked my wife whether   she will give   water  like that,
She said, Ï would not even open the door and I remeeberd,
How now I am taking free in  cell phone and eat  one Vada  for twenty rupees,
And  how I used to eat  one Vada for one rupee and tak for 5 five minutes  paying six rupess.

I remember how  I am storing ten  new films in my 64 gb memory card,
Used to stand  hours before  my neighbours home to see   a part of picture  free,
I remember how nowadays I go to  purchase  gold winner oil for hundred rupees,
But I used to take a used medicine bottle   to the shop to get 100  ml oil.

Once upon a time  I used to drink  coffee mixed with third  decotion,
But my children, refuse to drink, drinks like  Boost, Horlicks ewtc,
And ask for  some peculiar   new drink   and even that,
They would drin half  the bottle and throw it away

I struggled to get some  food,
But my children  struggle  to eat  any  food.