Go to Kathalaya, Bangalore to hear stories and to learn how to tell stories.

Go to Kathalaya, Bangalore   to hear stories and to learn how to  tell stories. 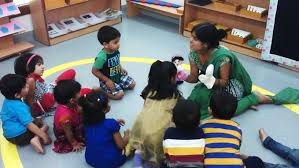 All  of you must be knowing  how simple is to teach  children by telling them stories.Once upon a time  it was a job of Grandpa and Grandma   to tell stories  , because   they did not have  any job to do .Much much before   the world knew about art of story telling , India knew it. In fact  one of the greatest collection of folk stories of the world   called “Brihat Katha Manjari” (The huge  bouquet  of stories) “ was written in a language  called Paisachi ,  which existed prior to Sanskrit . You all know how  India kept the lamp of  her religion burning  bright   through story telling –The story of Rama, The story of Krishna, The  Story of the goddess  and so on,. When  majority of Indians did not know how to read  Sanskrit  , a group of minstrels  called Hari Katha  exponents roamed  all over the country telling these   stories  to the common people in the common language. Yes, the art of story telling still exists in India but a time has come when we are  not able  to attract modern children and lads and lasses  by following the traditional method. So there came a need  for a group of expert  story tellers with sophistication,.Kathalaya (the home of the stories)   grew out of that need. Smt.Geetha Ramanujam nurtured   the story telling plant called Kathalaya. Now it has grown in to a huge banyan tree   with several branches as there was  a need for such a tree. Kathalaya  realized that  it cannot go to all places   to tell stories and train people. So just like  teaching the art of growing food  is better   than direct supply of food to people, Kathalaya   started  training people  to tell stories. I understand  70,000 opeople have been trained. Here   is a Small  poem that  I wrote   about them:-

Once upon a  time in the state  of  Magadha,
There  were  five princes   who were   fools ,
And the king wanted  them to be made  wise,
In a period  of   six  months sharp.

A great wise man undertook    that job  ,
And  told   the  five princes  within that six months,
Five stories   which  encapsulated lot of  wisdom,
And at the  end of that period , those princes  wise.

Yes , there  is in this  city of Bangalore,
And she   runs  Kathalaya-the home of stories,
She was  once upon a time teaching school kids ,
And she found  that  the best way to teach kids,
Was to tell  them  a story  so that  they understand.

Once she told , Hey children learn lot of lingua  ,
And they did not understand   and were staring at her,
She told them how  when her kittens   were attacked,
By a fierce dog, the cat barked   and chased him away and they understood

She started  telling them stories   to teach science,
She made the difficult maths  easy through stories,
And all  the kids   who came   to know  her,
Felt at ease  to learn  everything to stories.

Knowing that    she alone cannot   transfer knowledge ,
To each and every one    , by telling them stories,
She   started   teaching  lots and lots of people ,
How   to transfer  knowledge   to others  through stories.

All the world   sent their teachers  to get ,
Trained under  her  so   that  the struggle,
They  used  to have   to train  every one ,
Became easy  through   story telling.

The Banyan tree   of the “Home  of stories”,
Grew   every where   by striking    roots ,
In Very many countries of the   world,
And  awards and recognition  for it grew

This organization is in Bangalore . So you can always  send your children to heat their stories  or even get trained  by that  Institution. You can contact them in Bangalore:-