A brief  write up  on Saptharisheeswarar   temple  ,Lalgudi(Thiruthavathurai ) and the
Lalgudi  Pancharatha Krithis of  Saint Thyagaraja 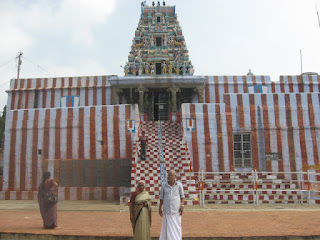 This is one of the ancient Shiva Temples  of Tamil Nadu. Lalgudi is located   about 20 Km from Trichy   town on the banks  of  Kollidam river. The old  name of this town was  Thiruthavathurai (The divine place  of penance) .  It seems Malik Kafur  who marauded  the entire South India visited this place and at that  time the temple tower  was being painted red   and he asked his assistants  , “What is that   red temple(Lal gudi) ?” and from then on the name Lalgudi struck to the town .The Goddess  of the temple is called  “Mahitha Pravrudha  Srimathi”. The  God Saptharishiswarar   in this   temple  is Swayambhu (self formed) and faces the west. The linga has a vertical red split  on its head and there is an interesting story   about the origin of this  temple .
It seems an Asura  called Darukasura   was troubling the devas  and nothing could be done against him because  , he would  only be killed  by  son of Lord Shiva.When the devas went and prayed  Lord Shiva, six sparks of fire emanated   from his  third eye. These  sparks were  initially taken care of by  river Ganges and later they were  entrusted  by the Saptha Rishis (Seven great sages   viz  Athri , Brugu  , Vasishta, Gauthama  , Angiras and Mareechi with the wives to look after .Though  they were  looking after them fell , to give milk to the six babies they summoned the Kathika maidens. When the sages  came  to know  about it, they lost their temper  and drove away their  wives from their home. This was  brought to the notice of Lord Shanmuga    only when he was returning after killing   the Darukasura.  And he cursed the sages. To get rid of the curse  the sages went to THiruvayyaru   and spent  lot of time in penance and when they failed they came to Thiruthavathurai   and prayed to Lord Shiva  .Then it seems the top of the Shiva linga  split and all the seven    sages were   taken inide him. When they became a part of  the Lord himself , they lost the  effect of the curse.  The  Saptha rishis  started  living  in that temple forever  . Since  Planet Sun was the son of Marichi , Moon the son of sage Athri , Mercuru is the son of moon, Jupiter  the saon of sage Angiras , Mars   belonged   to family of Vasishta and Sani  was the son of Sun God  .So  when   a devotee  prays in this temple   all the problems due to    these nine plants  vanish.
It also believed that  Lord Vishnu   got his Chakrayudha   after worshipping  the linga here and several sages have been cured of their diseases   by praying here.This Temple was  believed to have been   built by Paranthaka kings. It is also believed  that Sambandar   , the Shaivite saint  sang a poem anout this temple  but it has been lost.
The Pooja timings of the temple are

Pallavi
Oh mother    assuming that   you are my protection,
I  have   come with a request to you.Any feeling of neglect towards me

Anupallavi
After greatly searching my brain , taking a decision,
I believed   in  your feet   Oh Goddess Sripruvruddha sri,
Please protect   this true slave  of yours.

Charanam
1.Oh Goddess  who has got established in Lalgudi town,
And is engaged  in givinf divine joy to everybody,
Would Lord Brahma be  able to praise  you?
Oh Goddess in this earth there is no mother  equal to you,
Am I not a person belonging to you?
All the guardians of directions are waiting ,
For getting rid of their sorrows with the  belief,
That you are the goddess    who can give
All  the boons that  they want., with great certainty.

2.What great blessed deeds have been done ,
By those   who are living in this great city,
Oh Goddess  who lives in Sripura , I surrender to you,
Oh Amba , I would not   ask any body else,
Do not delay in seeing me  with  the corner of your eye,
In this earth who else is there   for me except you?
Do not say to me “Tomorrow, tomorrow” .
Oh great one your fame  is as   tall as the     tower.

3.Oh goddess  who has a full moon like face  ,
Oh Leader  of the earth , Please hear, oh great enchantress,
You are the primeval goddess to all Gods   ,
Oh mother, When my mind is concentrated on you ,
Why is it that   your kindness  has come,
If on seeing you  I again and  again request ,
You for wealth and grains, it would be dishonorable,
How much can I ask you commensurate   with your fame?

Charanam
1,Am I not  an ignorant  boy,
Is not wisdom your asset,
Is it proper  for you to get angry me?
Can You not  talk to me pleasing words?

2.Since there is no one  to protect  me,
Your indifference  making you not see me in spite of seeing  me,
And to me  who is your slave  who am not able to make ,
Good people     take pity on me  , You are the only protection.

3.Oh my mother   who has an auspecious  face,
I am receiving   the grace from your brother  ,
And so I directly   came and surrendered to you,
Oh Goddess who is in the heart of Thyagaraja

(This Krithi  is about Saptha Risheeswarar)

Pallavi
Oh God who lives in Lalgudi(THapastheertha pura),
Please give me  devotion to you immediately,

Anupallavi
Oh pure one whose  house  in the heart  of the Goddess.
Pravrudha Srimathi  and wjo protects all the world.

Charanam
1.Oh Lord who kiiled the chief of the Ganas  of Yama holding a rope,
Oh Lord saluted by Indra , the king of devas who is the enemy  ,
Of the flesh eating Rakshasas, who gives boons,
Who wears the moon who is the enemy  of lotus flowers,
Who is the lion  who controls the elephant like asuras,
And who is known as   the God  of the seven sages.

2, Oh God with blue neck , who is praised by the devas,
Who protects those who salute him , who is the lord of the mountain,
Who has a broad forehead, who is the collection of mercy ,
Wo is good natured , Who is shiva who  in love with Gowri ,
And who is a wonderful God  , please  protect me.

3.He who is being worshipped by a serpent , who killed Gajasura,
Who is being praised by Indra and Brahma  , Who has  innumerable ,
Good qualities, Who does not have   anger and pride  ,
Who is the  destroyer of sin , Who is Hara and Thyagaraja

Pallavi
Oh Goddess Mahitha  Pravruddha Srimathi,
Who is  the mother of   Ganesa and Subrahamanya

Anupallavi
Oh Goddess who won over moon by the beauty of her face,
Who gives auspiciousness m, protect me ofh ocean of gem of good qualities.

Charanam
Please give me devotion  to your feet,
Oh Goddess who  has universe as her body,
Who gives always auspicious results,
Oh Daughter of snow mountain,
Who is sister of husband of Sita

2.Oh goodess praised by Varuna, who is,
The wife of Lord Shiva wearing   peculiar serpents,
Who is the peacock  that kills the serpent of Samsara,
And who  is goddess who rides on a lion.

3.Oh Goddess who is liked by him whom Arjuna prays,
Who gives desired results.
And Oh goddess who lives in  Lalgudi.

4,Oh Mother praised by Shiva  who wears the moon,
Lord Brahma  and Lord Vishnu who rides on Garuda,
Who has eyes like petal of lotus flowers,
And who is the giver of Luck to Thyagaraja.

Raga Kalyani
Thala
(This again is a Krithi on SAptharisheeswara)

Please protect me, Oh Lord of the entire world

He who destroyed the pride of asuras,
He who wears a snake, the god of the seven sages.

1. He who was worshipped by Lord Vishnu,
Would this lowly man be able to get to see you,
Is it because of the result of Thapas that I got your name,
Oh God who likes the music of Narada,
Oh God who removes the sufferings of the poor oppressed,
Oh great sea of divine joy, Oh consort of Devayana,
Oh God who is the father of seven sages,

2.Oh God is worshipped by Vyasa, I see that it is true,
You send your real devotees to the Kailasa on earth
Who is comparable to you and by your presence,
All sorrows are swept away and my birth has a meaning.

3.Oh God who is in Sama and other Vedas,
Who has eyes of moon, fire and earth,
Who cuts away evil things like Passion,
Whose feet are worshipped by Devendra,
Who has the bow made of the Golden Mountain,
Who else except you can be in the minds of sages,
Oh God of the universe whom Thyagaraja loves.
Posted by Raja Thatha at 12:54 AM